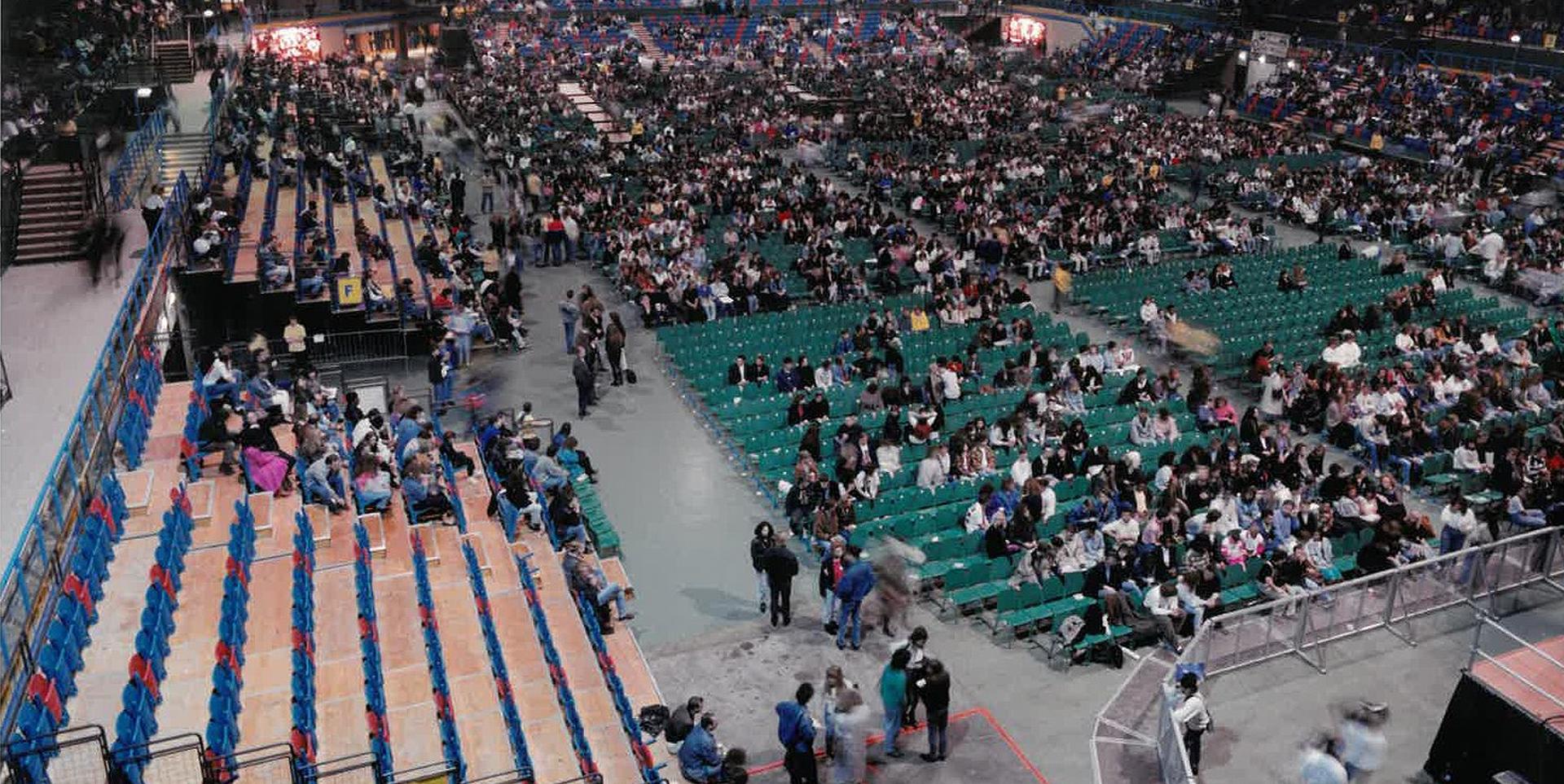 In fifty years of Audience Systems, some things haven’t changed. Our job is still to help customers specify their seating, design it, manufacture it, get it installed and service it. But of course, a lot is very different about the way we do business today. We take a look at a few of the changes over the years.

Audience Systems was started in a bedroom in Middlesex by father and son team Sidney and Stephen Brackley. Within a couple of years, the business moved to a new build facility at 9 Washington Road on the West Wilts Trading Estate in Westbury. As we expanded, we moved along Washington Road, before settling on our current home, number 19B in 1981. But our family continued to grow – and so did our home, with large extensions built to the left and right of our original building to house our warehouse, powder coat line (which has the largest footprint of any of our machinery) and more office space. The internal configuration of the building has changed more times than we care to mention as well!

Sometimes the world changes you; sometimes you make the change. Audience Systems was founded with the idea of introducing retractable seating to the UK. The idea came about when Sidney and Stephen Brackley were working for Lodge, a company that installed sports stands on US airforce bases in the UK, and was inspired by telescopic ‘bleacher’ systems from the US. They saw such great potential for this product in the UK, that they decided to set up a company to manufacture it. Audience Systems also manufactured demountable seating structures at that time.

A demountable system for the 1000 year anniversary of Tynwald, the Isle of Man's Parliament which meets outdoors.

50 years have taken us from a workshop environment to a high degree of automation. In the 1970s, our processes were labour intensive, without even a forklift for loading. As one of our long-standing employees commented, “The place felt more like a blacksmith’s”! We have evolved with the times, and even developments such as the introduction of battery drivers changed our operations considerably – taking us away from endless trailing leads and air hoses.

Recently investments in smart, programmable machinery – the CNC saw in the woodshop, robotic welders for understructure, an automated drill and saw line for our steel components – have completely changed the landscape of our factory. Having said that our spares and samples workshops still maintain the ability to craft one-offs, and as a bespoke manufacturer, we can never fully automate. Each system we make is unique, and we still make very little to stock.

Technology has also changed in our offices of course. Even by the late 1980s, we still had secretaries to type letters and memos and a drawing office that smelt strongly of sepia. When CAD was first introduced, it was on a single, very slow console and engineers would normally still print out drawings and amended them by hand. By 1990, we had a grand total of two PCs – and very few people who could use them!

The design process was very different too – it was very much “make, then draw”. These days the process is more heavily geared towards “draw, then make” – although there’s plenty of building and testing in the mix too. 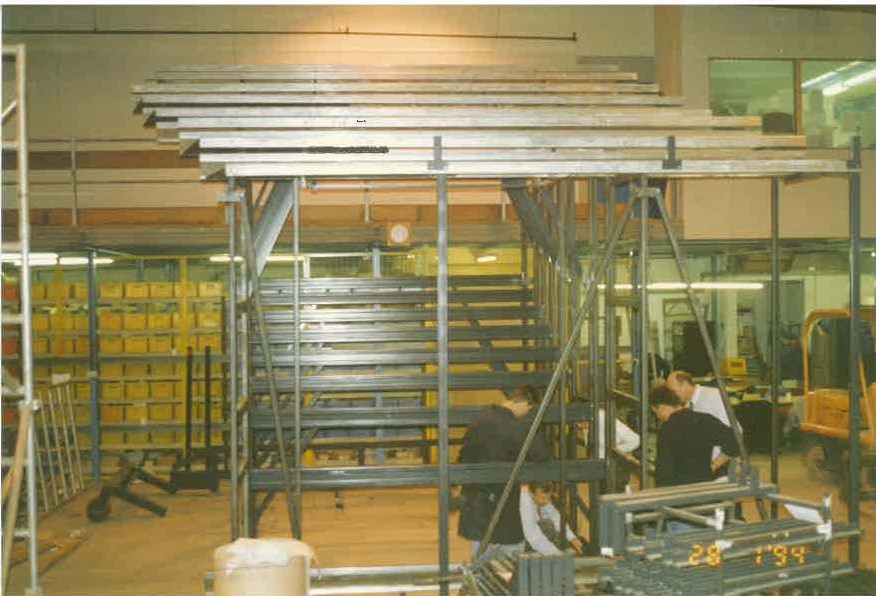 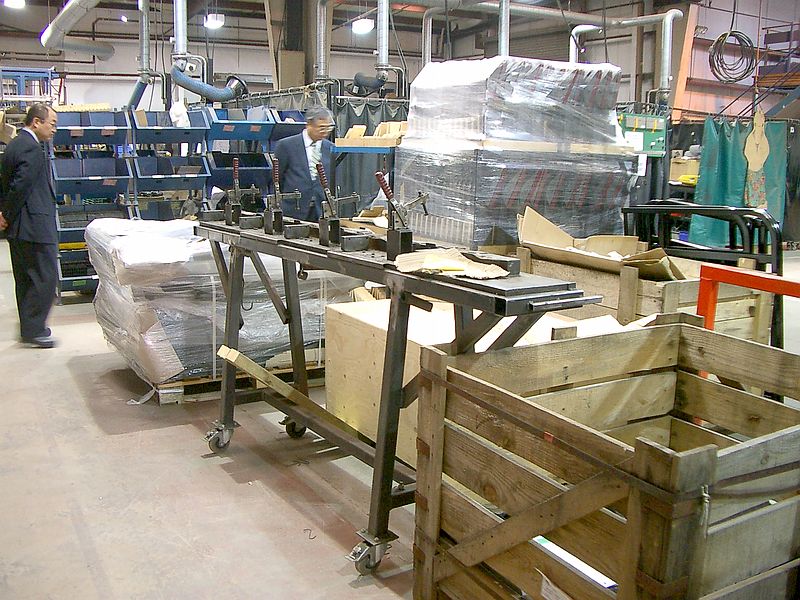 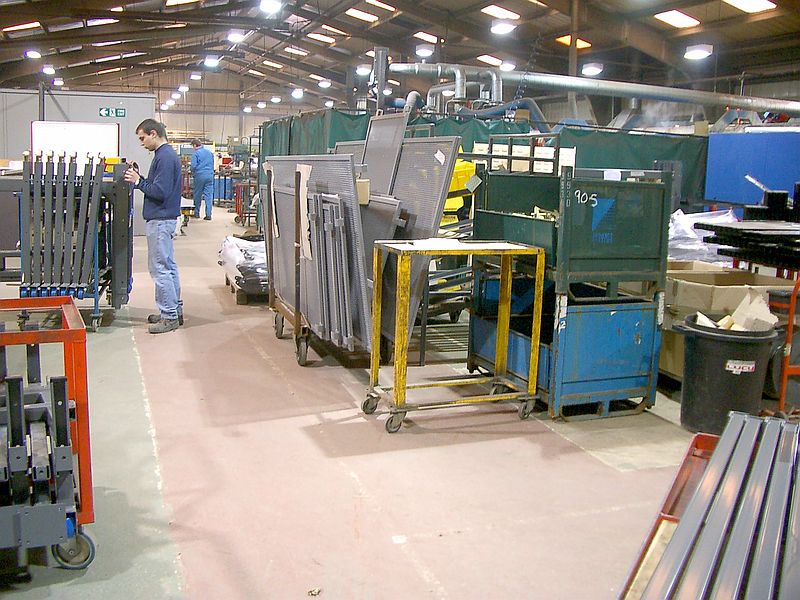 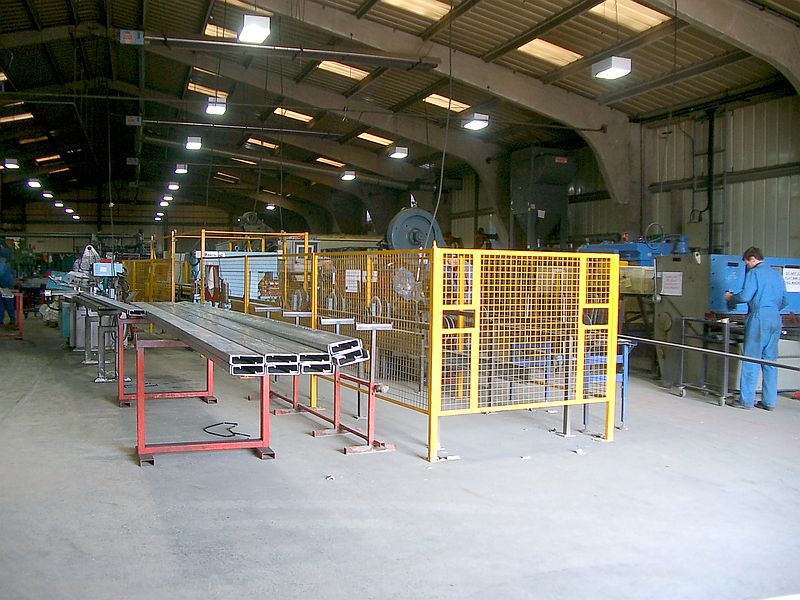 Around the busy factory in 2004

As we grew, we were able to take on larger projects; Grenada Arena in Spain, Fort Regent Leisure Centre in St Helier and London Arena were some of our first major installations. London Arena in particular was definitely an all-hands-on-deck experience, but we made it, and the arena entertained millions until it was sadly demolished for housing in 2006.  Today we are known as arena experts, running two or three projects of this size per year, smoothly and with considerable experience under our belt.

Our association with Kotobuki Seating, who became our parent company in the 1990s, has had a big influence on what we are able to offer customers, their first major contribution to our product range being the Espace chair in the 1990s. Based on a Kotobuki design, this is still a best seller today – albeit with numerous improvements and variations. Our colleagues from Kotobuki also helped us to introduce an efficient CAD design system, which is only now being replaced with a 3D design environment.

Back in the “beige age” of the 1970s, we were following fashion, even if we didn’t realise it. Our steelwork, now finished in a thoroughly business-like black powdercoat, was once all wet-sprayed in a very contemporary “bitter chocolate”

The 2020s has been so far a time of turbulence and change, yet 2021 was a record breaking year for us in terms of orders taken. And so we look forward to the coming decades knowing that change will come – probably faster than ever – but that we can adapt, just as we have done in the past.